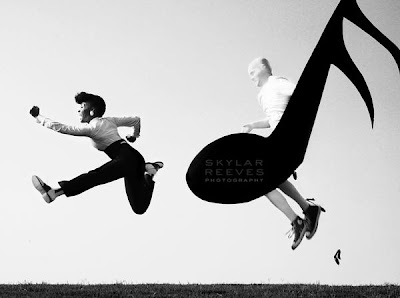 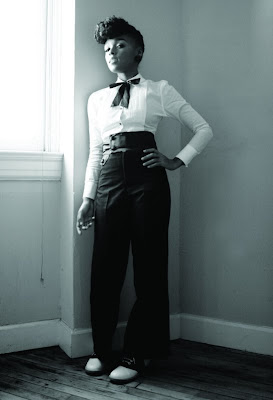 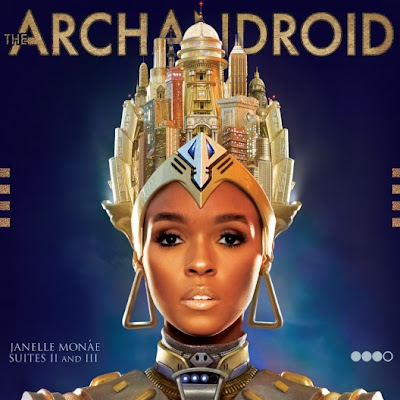 Two years ago Beyonce's younger, but not less talented sister, Solange Knowles, tried to put some cool experimental and eclectic twist into soul music. The list of producers on “Sol-Angel and The Hadley St. Dreams“ raised some eyebrows among the music moguls community. The effect: an ambitious version of her older sister's artistic endeavors and, sadly, less successful. Janelle Monae is another American soul singer and songwriter who tries to do the same. After an Ep and couple of a download only singles, later combined into her first mini-album “Metropolis: Suite 1 (The Chase)”, Janelle has set out to seriously stir up the pop world. Her first full release “The ArchAndroid” continues the genre-bursting journey into the cinematic future-retro world. As an inspiration Janelle lists, among others, Alfred Hitchcock, cabaret and the early sci-fi masterpiece “Metropolis”. Musically the album is a mix soul, funk, disco, jazz, hip-hop, musicals, vaudeville, symphonic soundtracks, even choral music and folk. A very eclectic mix indeed, which reminds me a lot of Andre 3000's “The Love Below”.
I'm not a fan of concept albums, which tend to get pompous, self-indulgent and mostly boring. They're full of distracting skits, pointless short instrumentals and revolve around some serious theme taking all the fun out of the music. By putting out an album like that, pop artists are painfully trying to prove of being more than “just” a pop artist. Apart from a few, like “ The Love Below” I've mentioned before, most of concept albums proved to be nothing else than quickly forgotten artistic cul-de-sacs. Fortunately The “ArchAndroid”, ambitious in both, form and content is anything but boring. The 70 minutes of the album is divided into two suites, each beginning with an overture reminiscing the orchestral scores of golden age of cinema. The plot, around which the album revolves, involves time travel, human cloning and Janelle's android alter-ego, Cindi Mayweather. It all would be very confusing, if the story was bigger than the music. Thank goodness it's the opposite. The plot just holds the album together and it doesn't get in the way of the music. There are ultra catchy songs and some clever production ideas here. The standout tracks and already singles, “Cold War” and “Tightrope”, prove that pop doesn't have to be brainless to be fun. The ultra sweet “Wondaland” is catchy and instantly makes you sway. Sunny “Locked in inside” is sharpened by Santana-like electric guitar. Smooth ballad “Sir Green-down” sounds like “Moon river 2010”. The album flows seamlessly from the beginning, merging the colorful tracks into delightful R'n'B cocktail. Janelle definitely knows the ingredients and who to mix them well with.

Her vocals are also a pure delight. Janelle hops between singing and rapping, melting both delivery styles into something of her own. From flawless rap on “Dance or die”, through the silky and warm soul in “Oh, maker” to Judy Garland style crooning in the closing “BaBopByeYa”. The cabaret-rock hybrid “Come Alive” sounds kinda punky with Janelle shouting over heavy guitar riff. There's also a collaboration with her old tour mates, flamboyant indie shouters, Off Montreal. Their quirky indie take on disco doesn't feel out of place on this already uber-eclectic record. “Make the bus” is another proof that mingling of the soul artists with the American indie scene brings surprisingly good effects. Just like Solange covering “Stillness is the move”, a track by another indie rock darlings, The Dirty Projectors, last year. There are others lending their talents on the record, like Outcast's BigBoy and inner city poet, Saul Williams. But their appearances remain barely noticeable blending into the background, as Janelle herself is running this show.

Pity that “The ArchAndroid” dies a bit at the end without reaching a cinematic grande finale. But Janelle, as Cindi Mayweather or not, will continue her journey and who knows where it will lead her considering her musical ADHD. Another thing the album lacks is a little bit of dark element to spice things up a bit. Some might find it too cartoonish and polite. It might be very hard to get over the Disneyims of this album in the times of Gaga turning pop into softporn controversy and the rest of the world following. But to try to put some innocence back into pop, without sounding too childish and naive, what Janelle manages here, is a huge achievement. If it won't gain too much of appraisal at the charts, it certainly will inspire some genre bending pop gems in the future. Lavish, rich and full of cultural references “The ArchAndroid” is as intelligent and as forward as pop gets these days.